Did you think you'd seen every possible way a laptop and tablet could merge? Lenovo's ThinkPad Helix is here to show you otherwise. Rather than simply flipping head over heels, twisting in place, or detaching from a battery-laden slate of keys, the ThinkPad Helix is a powerful tablet that actually gets more powerful when you combine it with its keyboard docking station like the Black keyboard for ASUS G51 G51J G51J3D G51Jx G51VX  — think Mighty Morphin Power Rangers but with Lenovo's trademark rack of keys rather than giant robotic animals. 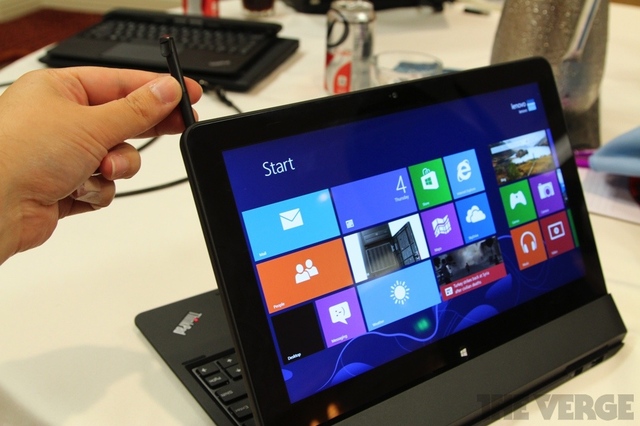 Not only does the 11.6-inch Windows 8 touchscreen tablet come with a bright 400-nit screen at full 1080p resolution, with up to a Core i7 processor, 8GB of memory, 256GB of solid state storage inside, but when you click the tablet into the Lenovo Thinkpad Keyboard dock, a special cooling system in the hinge allows the machine to overclock the Intel processor — giving it the headroom it needs to really fly. You can dock it forwards or backwards, with the screen facing away from the keyboard, if you still want a tablet but with extra performance and battery life.

There's even built-in 4G LTE connectivity, a healthy array of ports, and an active Wacom stylus pen in an actual slot. There's NFC support so you can activate things by tapping phones or tags to the device, and a Kensington lock slot built into the tablet's locking mechanism, letting you keep both halves of the tablet firmly attached to a security point. Lenovo says the Helix is good for 10 hours of battery life, too, with five hours from the tablet's internal cells and five more from the keyboard which is similar to IBM Thinkpad T420 X220 Series Laptop Keyboard .

What's the catch, you ask? Well, there's Lenovo's $1,499 starting price, an unusual glass touchpad with five buttons underneath the surface rather than readily visible, and the knowledge that you'll need to wait until February even if you have ready cash.