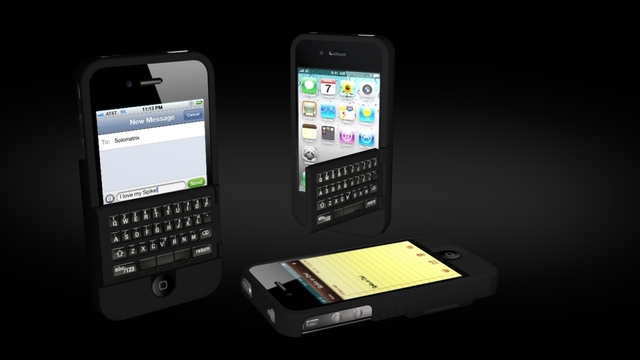 Spike, a physical keyboard for the iPhone 4 and 4S which folds away into a case, has appeared on Kickstarter. Unlike most laptop keyboard  accessories for the iPhone and iPad, Spike doesn't require a Bluetooth or dock connection — instead, it positions itself directly above the virtual keyboard on the device's screen, providing a fully tactile equivalent.

It's an interesting idea, but it may not be practical for those who don't spend much time with their iPhone's keyboard. Spike's creators attempt to mitigate this issue by allowing the device to fold back into the attached case, but it creates an odd bulge on the back of the phone.

Assuming that Spike reaches its Kickstarter target of $75,000, units will start shipping at some point in October. To get a basic model, backers will need to put up at least $25 — a deluxe version with a strengthened case costs $50.

The Spike Keyboard will be available in 2 versions. They both feature a small QWERTY laptop keyboard   that is positioned over the iPhone’s display and can flip out of the way when you aren’t using it. The Spike 1 requires you to pull off the bottom half of the case and rotate it to the back. The Spike 2 keyboard has a 360 degree hinge that enables you to flip the keyboard all the way around so that it snaps to the back of the case when it’s not being used. The really interesting fact is that the keyboard does not require any power or a Bluetooth connection. It uses something that they are calling Disruptive Technology. My guess is that each key is like a tiny capacitive stylus that touches the iPhone’s onscreen keyboard.